How might we enrich video with other resources or experiences so that it better supports your practice?

In Stage 1, we heard that watching a video by itself isn’t often helpful. 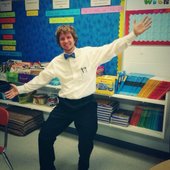 My idea is to have a camera that will record 360 degrees and capture the entire room. I would like them to be easy for the teachers to use so that they can go back & watch themselves teach, or have others watch them teach to give them feedback to grow. If this could also be accompanied with a way to inbed comments while watching the video that would be a big added bonus.

The impact would be great on getting teachers to reflect on how the lesson actually went and observe areas that they might not notice while infront of the class. It would also eliminate having another person in the room to run the camera to record, which can be distracting and hard to find the man power. It would also allow you to record teachers and share their strengths with other teachers that don't have the opportunity to get out of their classrooms to observe.

The camera would be placed in the room and the teacher would have a lapel mic. They could record themselves and then rewatch it or share it with others to get feedback. The addition of embedding comments could give flexibility for others to watch it when they have the time and add the comments for the teachers to see while they rewatch it. The comments could also be added and then have the video shared with a group to watch the positives and hopefully replicate.

Know people who have something to add to this conversation?